My apologies to the Johnson family as the title says Go Cards NOT Cubs!! The Johnsons are all Cubs fans (oh the horror) but since CJ lives in the STL he must be a Cards fan....it's a necessity. Do you want him bullied at school? :-)
Anyway, we were offered four free tickets on Monday night for the Tuesday night game against the Nationals. FREE tickets? I didn't even have to hesitate! Since the game started at 7:15 we thought it would be too long of a night for Ms. Ry so she spent the night with Nana and Pop while me, CJ, Greg and my friend Becky headed to the game. It was a perfect night with temps in the upper 60s. CJ just had to have cotton candy which he said tasted like hair in his mouth! 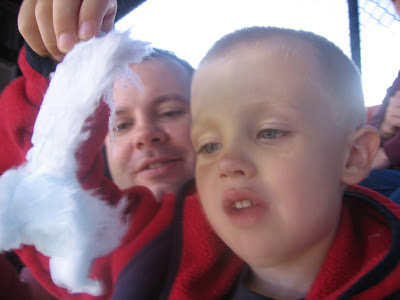 We got to see TWO homeruns courtesy of Lopez and Ludwick! CJ was not a fan of the fireworks as the evidence shows: 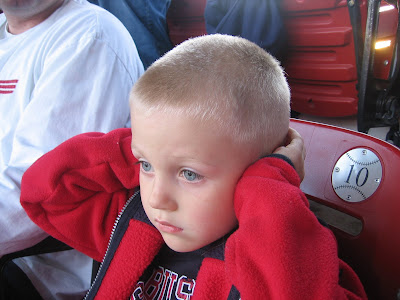 CJ may not have liked the homeruns but I did because that meant Sonic blasts were only $.99 the next day. I had one after spinning class. What, I burned enough off before?!
I'll end with my guys who are just too adorable for words: 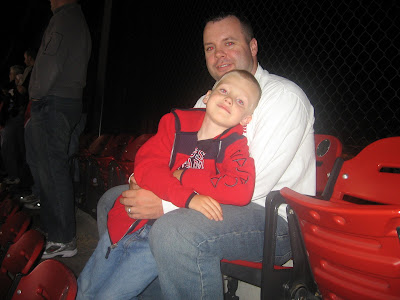 Saturday I run my first 5k with some friends. I'm so pumped!!
-J
Posted by cjrymommy at 7:44 AM 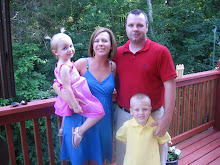 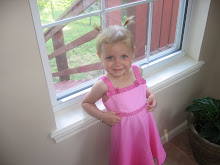